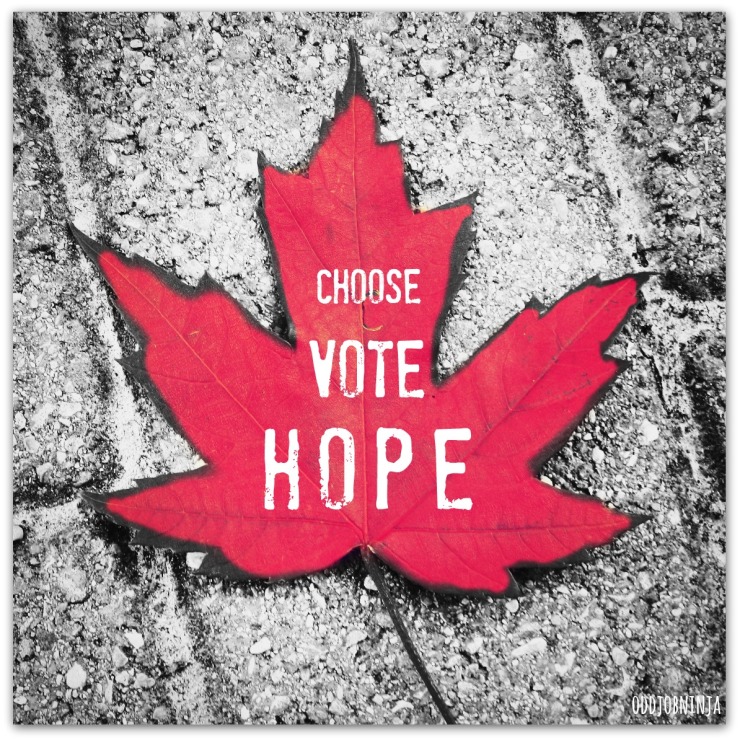 It would have been 23 years ago around this time of year that I wrote my very first article for my university newspaper, the Dalhousie Gazette. Actually, it wasn’t so much an article as 300 words that our editor desperately needed to fill a hole in our op/ed section. And fill it I did, describing the poorly attended student rally to protest yet another round of tuition hikes. If I recall correctly I believe I began my eloquent editorial with “Dear students of Dalhousie – GO FUCK YOURSELF.”

Today is Election Day in Canada (AND game 3 for the Blue Jays in the American League Championship series – GO JAYS GO!). I confess I didn’t vote in the last couple of elections (boo–hiss). I was in Afghanistan for both of them but that’s no excuse; even in Kandahar Airfield, Canadians were free to vote. I don’t recall why I didn’t vote, but I suspect I got busy and just didn’t get around to it. Or I didn’t want to lose my place in the Tim Hortons line.

This year however I am voting. Which of course means – like a newly reformed ex-smoker – I must now harass my friends about their filthy non-voting habits.

Except I won’t, because I sympathize. Too busy, not enough information, too much information, working too late, long lines and an 8:00 pm EDT start time (GO JAYS GO!) – there are lots of reasons why people won’t vote.

BUT there is one group of non-voters I’d like to spend a little time with: the people who are fed-up with politicians.

You know who I’m talking about. I mean those folks who swear that ALL politicians are <INSERT *TERM OF ENDEARMENT* HERE>.

I get it. If I believed everything I saw on TV or the internet I’d believe Justin Trudeau is a light-weight because he has nice hair, Stephen Harper is evil because he has cement hair and Tom Mulcair is a giant cuddly teddy bear. Or a big mean old nasty bear. I forget which.

With all the scandals (crack-smoking mayor, senators’ spending spree, #peegate) it’s easy to call politicians names. The hard thing to do is ignore the headlines and talking heads and the non-stop noise to ask a few questions, dig deeper, and find some good. Something that worked. Someone who helped. Some surprising collaboration. Someone who made a difference.

You’re probably not going to find it on the news, and your friends probably won’t be sharing it on Facebook or twitter, but these moments happen and these moments matter.

When you start calling people names, you are on the road to contempt. Ordinary people are capable of doing terrible things when they feel contempt for a person, when they stop feeling empathy and start thinking of someone as less than human.

I guess what I’m saying is that words have power, and the feelings behind those words are highly contagious. A self-righteous rant might help you blow off steam, but it’s not effective in bridging a difference of opinion.

Also, if you want people to consider your point of view, it may be best if you don’t tell them to go fuck themselves.

Luckily, my friends who are fed up with politicians lean more towards cynicism than contempt. And everyone knows that cynics are just idealists who got their feelings hurt, so maybe all they need are a few good hugs. I hear Tom Mulcair gives awesome hugs. Or will rip you limb from limb if poked. I forget which.

Vote or don’t vote. Choose or don’t choose. Like my feelings about God (and the Blue Jays), when it comes to politics I’m an optimistic agnostic. I might be short on faith and have no shortage of doubts, but I do have hope.

This evening I choose. I vote. And I hope.