The KAF Chronicle (AKA shortest newsletter series EVER)

We only put out two issues of the KAF Chronicle while I was in Kandahar, but I was proud of them nonetheless. I wish it could have been a full-time job– taking photos, talking to people and learning their stories – instead of squeezing it in between work and not enough sleep. 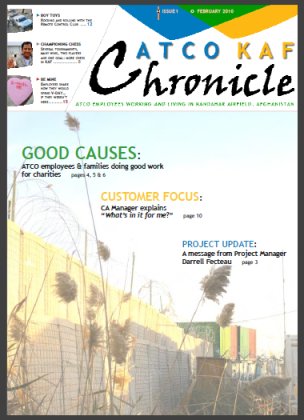 Judy,
I hope you still remember me:) I was talking to Branka (I hope you remember her as well) and she gave me this link…awesome..I was wondering how are you and I guess I positively draw this blog. How is life treating you these days?I am not on FB any more, I never really like that social net anyway.I am glad that I have found this and I will read more later.I you find some time you can e mail me back.Thank you for being part of my life in Kandahar.
Elvira

Elvira! So good to hear from you! And how nice to know that both you and Branka know where to “find” me. YAY! Yeah, facebook is tricky, but I do like that I can quickly find out what my extended family is up to – there’s so many of them! I’ll send you a quick email now so that we can stay in touch. And by the way, thank YOU for being a part of my life in Kandahar. BIG HUGS!

Thanks Lady, I already sent you reply 🙂 xoxoxoxoxo