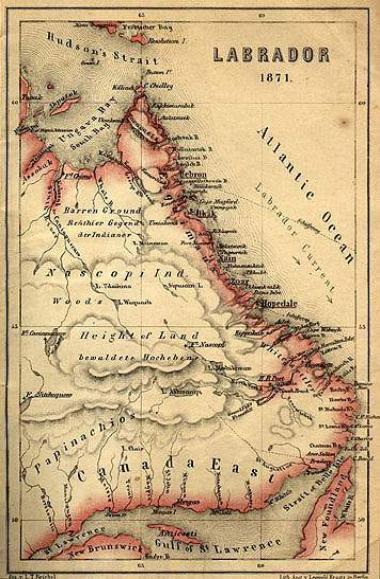 Labrador – that big chunk of land east of Quebec, 2.5 times larger than Newfoundland with almost 8000 km of coast line (map from 1871).

My parents left Labrador in 2002 so that Dad could get a new set of lungs to replace the scarred pair he had from working thirty years in an iron ore mine. They moved from Labrador City, a town with a couple of traffic lights to the heart of downtown Toronto, a city of two million, expecting they’d find a match in six months and return home.

Dad received his transplant in 2005, two and a half years after he and Mom moved to Toronto. It was incredible to see the change in him one month post-transplant; he went from wearing an oxygen mask and being pushed in a wheelchair to walking with ease without an oxygen tank in sight. Dad’s transplant team of physiotherapists, counselors, nurses and doctors were just as excited as we were to witness his progress.

Soon Dad was well enough to go home, but never to Labrador.

Labrador City’s hospital didn’t have the facilities or equipment needed to care for a post-lung transplant patient. St. John’s did, but it was still 2000 km from their home, so Mom and Dad decided to move to Ottawa because my sister and I lived here, and of course being able to see their grandsons regularly didn’t hurt either.

Unfortunately Dad’s recovery didn’t last long. It’s a tough job trying to fool your body into accepting an organ it knows has no business being there. Although Labrador was out of the question, we had lots of family within driving distance of St. John’s who we planned to visit, but Dad never recovered enough to travel again.

In the summer of 2007 Mom and I left Ottawa and drove 1400 km to Labrador City. I was to start working in Afghanistan that fall and Mom wanted to decide what to do with the house before I left. I wish now that we had waited longer or decided to come back again in a year before making any decisions. But in the end Mom let it go and sold it. She said it no longer felt like her home. Looking back I think the truth was she couldn’t feel anything at that point except grief and loss.

Mom stayed in Ottawa and I left for Afghanistan.

I worked on the NATO base in  Kandahar for four years and a couple more in the Alberta oil sands before returning to Ottawa in the summer of 2013. That fall I started working again with Nasittuq (a company that spans the Yukon, Northwest Territories, Nunavut and Labrador), moved into an apartment with my boyfriend (a first for me) and started saving my pennies so I can build a tiny house on wheels. The plan is to drive it to Newfoundland and get to work on making a new home for all of us on the land Dad left us in Trinity Bay.

I haven’t been back in years but my dreams still take me to Labrador West. I dream of riding my bicycle on empty streets in the middle of the night; playing softball in NDA’s parking lot with its patches of cement surrounded by deep puddles from melting snow banks; driving a beat-up station wagon near my best friend’s cabin in Duley Lake when I was twelve years old; racing across Wabush Lake on a skidoo; canoeing to our cabin and skinny-dipping in Moosehead Lake as a teenager; getting lost in the halls of Labrador City Collegiate my first day in grade 7; showing up late for a final exam at LCC before being allow to graduate from grade 12. Once awake there are flashes of memories so strong that I am shocked when I realize I can no longer walk through the back door of 4 Juniper and watch CBC’s Here and Now with Mom and Dad. 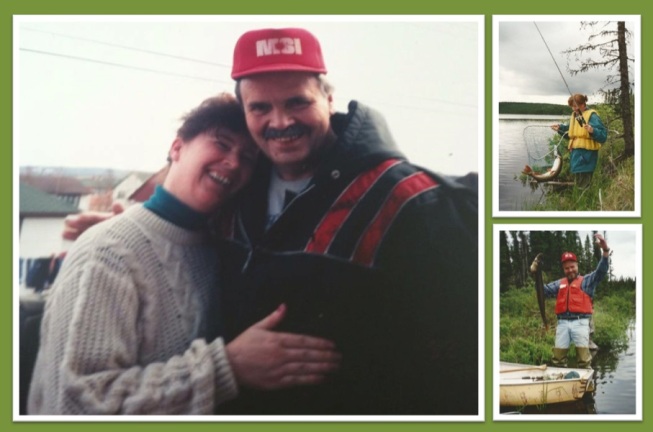 Mom and Dad loved Labrador, and especially loved escaping to our cabin on Moosehead Lake.

I can however grow some Labrador connections here in Ottawa. I can reconnect with old classmates, former teachers and neighbours from Labrador City. I can also forge some new ones with people from Happy Valley – Goose Bay, North West River, Hopedale, Cartwright, Natuashish, Rigolet and the many places in Labrador I have yet to explore. It’s hard to believe how much our experiences differ depending on which part of Labrador we come from, despite having the smallest federal riding in all of Canada with just over 30,000 people.

The Labrador Society of Ottawa has been connecting Labradorians in the nation’s capital for more than twenty years, and it’s on the verge of collapse due to lack of members and volunteers. Today I will be attending my very first meeting and I’m hoping there will be enough of us there to keep this organization going. I expect we’ll have a lot of work ahead of us and will need some help if we’re to attract new members and create events that will engage all generations of Labradorians and friends of Labrador. 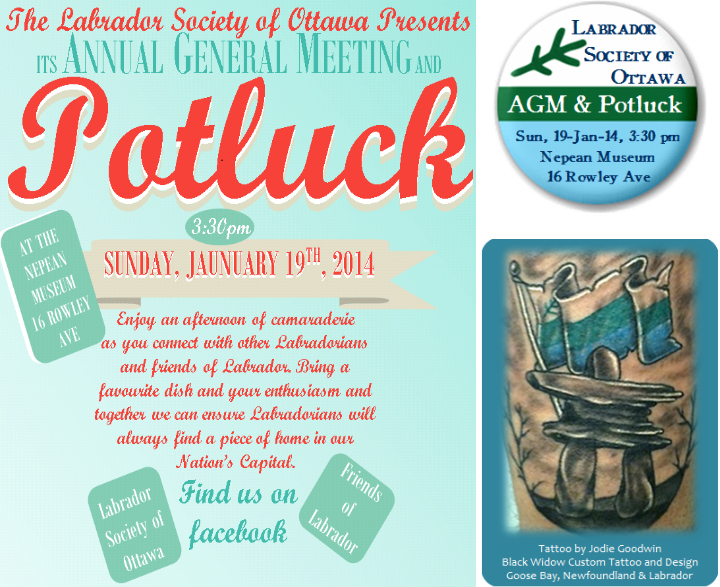 In case you’re in the neighbourhood grab some grub and join us.

I don’t know what will happen at the meeting today, but I do know that once the decision has been made, once we sit down to our fine potluck and reminisce with old friends or share stories of the Big Land with new ones,  I know I’ll feel closer to Labrador than I have in a long, long time. And to Dad too.

UPDATE:  We had more than enough people attend our AGM to put together a strong Executive for 2014-2015. I was elected as PR and Membership Director along with Carol Dunphy who is also from Labrador City. Our Executive is now organizing a dinner and dance for late May or early June.  I’ve got a bit of a learning curve ahead of me as I navigate through Twitter and get the Labrador Society website up and running. Stay tuned!

Mah ha ha ha! All part of the plan! But seriously, me too. BIG HUGS.

Like Katrina, tears are running down my face as I sit sobbing for what was and knowing we can’t turn back the hands of time, even if we want to. I still miss my brother, and the Big Land (the way it was when we
lived there, not all the construction that is going on right now). However, I have great friends, family and community right here that I cherish and enjoy. I hope you can get the opportunity to visit us here in Newfie soon, All your family here, would love to see you. Love, Aunt Marjorie.

Thank you Aunt Marjorie. We still miss him too and think of our family “back home” often. I’m looking forward to the day when we’re together again.

Judy, That was beautiful ! It is sad because it makes me realize that my children are not growing up in an environment as free as ours was. God Bless Labrador and it’s people!

Oh Dana, it’s so nice to hear from you! I agree it is sad that our kids don’t have that same kind of freedom – and parents too from worry! Hard to believe, but I guess those were our good ol’ days.

Hey judy, as I was reading your story I was overwhelmed by a thousand memories. I miss all of you and I hope you know that my door is always open to all of you. Your mom still accompanies me on my evening walks as there sin’ a day goes by that I don’ t think of our million conversations and laughs, I miss your dad’s easy smile and his way of trying not to take sides when your mom and I had a tiff. Lol. He will always live in my heart as one of my favourite people. I passed by 4 juniper today and I still feel like I should pull in the driveway. Love and best wishes to all of you, Cathy

Aunt Cathy, you made me cry! I’ll be sure to let Mom know how much you’ve been thinking of her. I know she certainly misses those walks too. Ha ha! I was just now thinking about those few times when you two would have a little falling-out. Could never last long, ‘eh? Yep, and Dad was always a diplomat in those cases. Thanks for sharing your memories Aunt Cathy, it means a lot.

Hi Ellen, yep it’s me! Did you live on Lakeside or Tamarack? If you did, then I’m pretty sure Kelley and I knew your sons!